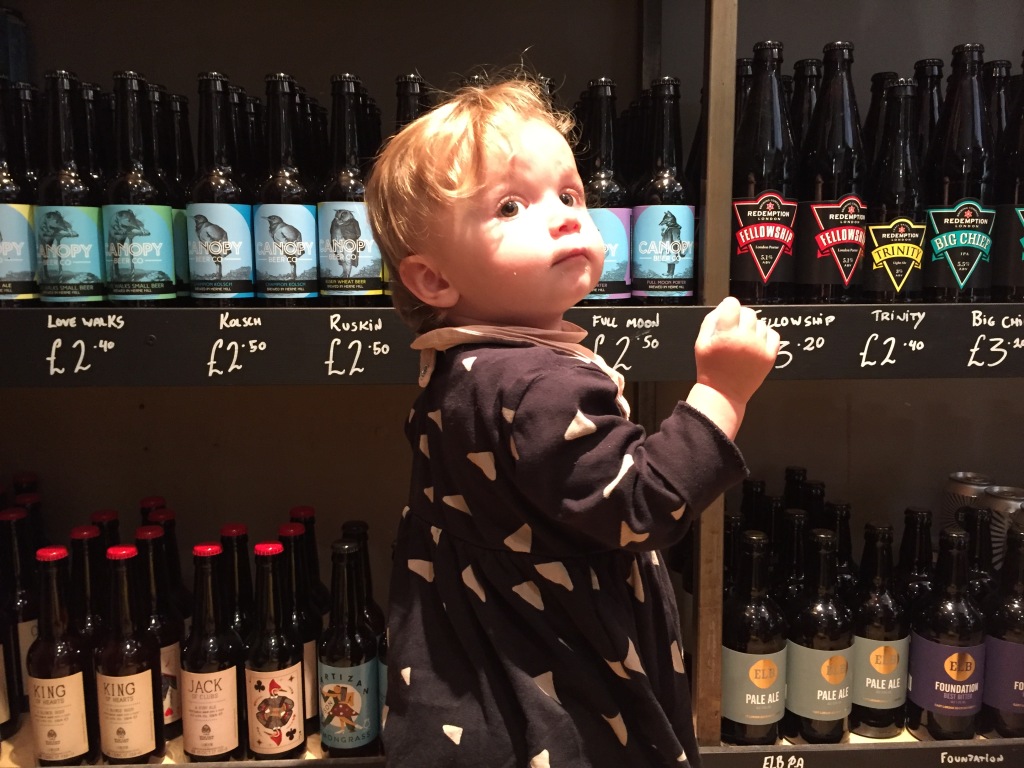 What?: This is about as adult-friendly as mummy-and-me activities get: a whole afternoon dedicated to you and your alcohol addiction where babies aren’t just welcome, they’re compulsory. This is basically alcoholics anonymous for new mums, minus the guilt, oversharing and name badges, and with the added advantage of alcohol. So actually nothing like alcoholics anonymous.

The atmosphere is as chilled as you would expect of a wine shop that’s happy to accommodate 12 tiny destroyers and their wine-sozzled mothers. There’s a semi-circle of chairs on which mums can park themselves and their urchins, though you’re just as welcome to sit on the floor – glass of beaujolais in one hand, teether toy in the other – while your little ones roll around on a dried-apple carpet of their own making, emptying every handbag in sight and stuffing half-chewed raisins into each other’s nostrils. The wine is informally presented at regular intervals, served in modest quantities and in sensibly stem-free glasses, and with large plates of cheese, cold meats and biscuits to soak it up.

We were given six drinks to try: a lively Prosecco followed by a delicate white, then a peachy white, a dry rosé, a super-light red and a choice of dry, medium or sweet port to finish. The website claimed that spittoons were provided and I’d convinced myself that I wasn’t going to swallow having overdone it slightly a couple of nights before, but then when I had the glass in my hand it just seemed offensive to the wine to spit – plus I couldn’t see any spittoons and I wasn’t going to be the only person requesting one.

Each of the wines tasted was available to buy after the event with a 10% discount, but to be honest by that point I was too pissed to remember which ones I liked and which ones I didn’t, and I didn’t want to look at another glass of wine for some time. Bottle Apostle’s mums’ tasting events are scheduled to last for an hour and a half but ours ran for nearly three and the rest of the day was a bit of a write-off, with the already quite painful pre-bedtime hour seeming to last a whole day and even the next morning feeling a bit laboured. Worth it though.

Where & When?: Mums’ tasting events take place once a month at each of Bottle Apostle’s five London shops (see website for details). We visited the Victoria Park Village store and the other branches are in Primrose Hill, East Village, Clapham and Crouch End.

Best Bits: This is the only place I know where you can sit, child on lap, wine glass in hand, and not be judged.

Worst Bits: This probably wouldn’t work with a fully mobile toddler in tow. Bottle Apostle might be absurdly laid back for a wine shop but it is still a wine shop with wine in easy reach of tiny hands, so you might want to avoid this activity if your little one has smashy tendencies. Bab was quite a bit older than the other babies, whose ages ranged from three weeks to 10 months, but there’s no age limit per se – rather it’s up to carers to decide whether or not this is for them and their child. Bab was uncharacteristically calm throughout and spent the duration stroking the other babies’ heads and scoffing Carr’s water biscuits with no ostensible desire to break anything and not a tantrum in sight, though it could easily have been a very different story and I did also have a whole other childless adult helping me.

Would We Come Back?: This is definitely one of the best mum-and-baby activities we’ve embarked on and I would love to come back, though I would probably drag a (child-free) friend along again. I really wish I’d discovered this in those first dark weeks post-partum and I would absolutely recommend it to new mums as a postnatal treatment/low-key friend-making activity.