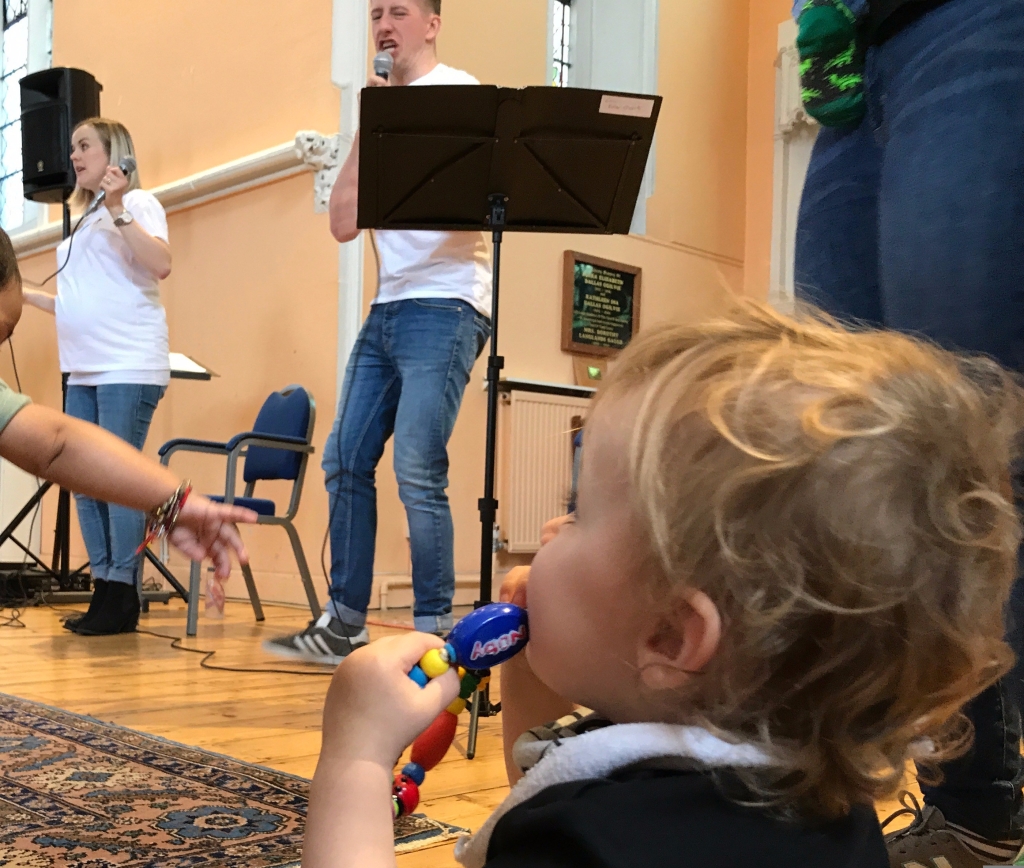 What?: “If you’re happy and you know it clap your JAZZHANDS!”, proclaims the event details page on the Baby Broadway website, which immediately makes me want to throw things at my computer screen. Now, you have to bear in mind that the cynic in me doesn’t really enjoy musicals, or singing, or indeed jazz hands, and that cynic accounts for around 90% of my personality, so things were never looking particularly promising for me and Baby Broadway. Everyone I’ve told about this who knows me well has, understandably, asked me what the hell was going through my mind when I booked it, but to be honest I’ll try pretty much anything in the name of entertaining the unyielding ball of energy that is my daughter.

So there we were at 11am on a Friday in a packed North London church; pews filled with baby-wearing mums, crawlers spilling out into the aisle, toddlers cruising the periphery of the space and a few scattered school-age kids looking jaded while we waited for the performance to start. So far, so like any other church-based mummy-and-me activity. That was, until the singing started – loudly and without ceremony. Thank God, I thought. I was expecting at least a few rounds of Wind the Bobbin Up to warm up our vocal chords but thankfully we were spared such suffering, with Claire (the singer, the female singer) launching straight into a set of cheerfully sung instructions on how to conduct yourself at a Baby Broadway concert (basically don’t be an arsehole) before segueing into Do-Re-Mi.

Now from a personal perspective this was great. I despise any kind of getting-to-know you/warm-up activity and would always rather just get on with the main event – I mean it’s not like an actual Broadway show would start with a chinwag and a biscuit (not that I would know) – but I did feel that the lack of spoken introduction meant that audience engagement was somewhat lost from the beginning. I loathe being told what to do at the best of times but even I felt that a noisy, 70-strong audience made up of more than 50% children needed someone to at least say “hello, time to shut up now”. Instead everyone just kept talking and would have easily drowned out the singers had their voices not been so powerful.

I spoke to one mum who said she preferred the relaxed, chatty vibe over something like Bach to Baby, where you’re politely told to put a sock in it. And I mean fair enough, but in my opinion it really detracted from the experience. Talking during concerts (other than to ask for beer) is a real pet peeve of mine and while obviously it’s completely unrealistic to expect children to remain silent for 45 minutes, it wasn’t the crying babies or the shrieking toddlers that annoyed me; rather all the adults mindlessly nattering throughout the whole bloody thing. Baby concert or not, this is still a professional performance and I think there should be a basic level of respect for the singers. Perhaps a gaily sung parental warning to pipe down wouldn’t have gone amiss – you never know, the kids might have followed suit.

Engagement issues and show-tune aversion aside though, I didn’t hate this. In fact, far from it. The singing was brilliant and there was a good mix of songs, from baby-friendly clement-weather theme ‘The Sun Has Got His Hat On’ from Me and My Girl to ubiquitous Frozen favourite ‘Let it Go’, plus classic mummy floor fillers including Grease’s ‘Summer Nights’ and Mamma Mia’s ‘Dancing Queen’. I even found myself singing along to ‘Any Dream Will Do’ because I make an exception for Joseph and the Amazing Technicolour Dreamcoat since it’s truly wonderful, and even a very grumpy Bab let her hair down and did something vaguely resembling The Time Warp at the end.

Where?: We went to a Friday concert at Highgate United Reformed Church but concerts are held all over London on all days of the week and generally run from 11-11.45am.

Worst Bits: There was a weird feeling of estrangement between the performers doing their thing at the front and everyone else having a chinwag and generally not really paying attention (save for a few five-year-olds living it up at the front and a handful of musical-loving mums having a boogie while their babies slept), which was a bit of a shame. Personally (and to be honest what the hell do I know?) I’d have encouraged quiet during the performance and then invited the kids up to the front for a supervised singing/piano-playing/yelling session at the end.

Facilities: Buggy parking, toilets. There wasn’t step-free access at our venue but there was someone on hand to help lift buggies up and down the front steps.

Would We Come Back?: It’s not for us but if you’re a sucker for show tunes then you’ll love it, provided you don’t mind the background noise.