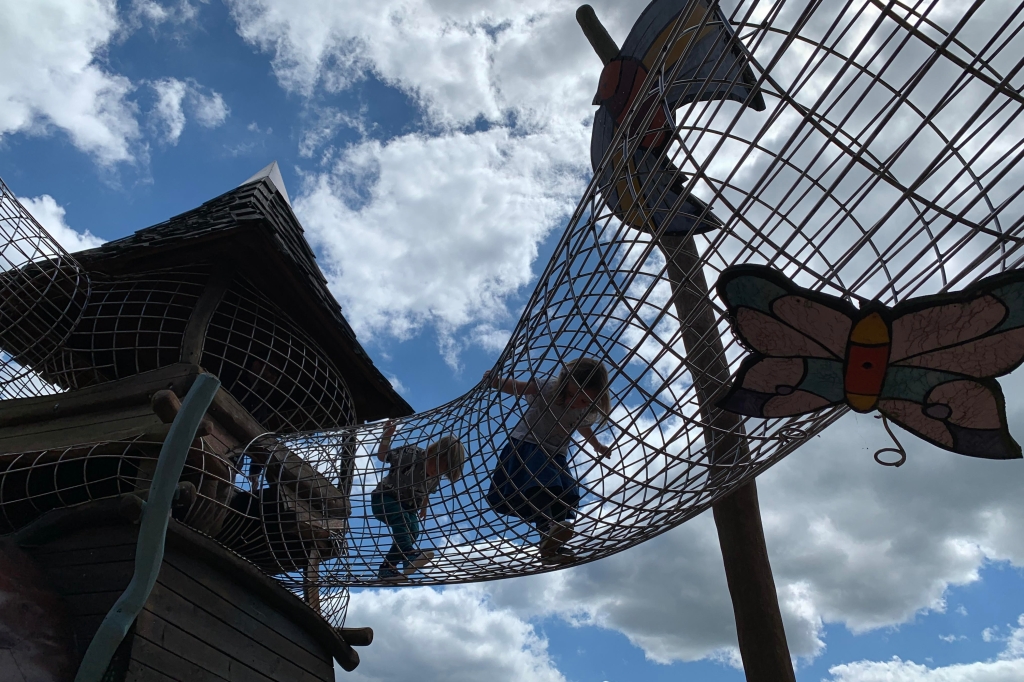 What?: This one’s been on our list for too long, but there was no way I was spending two hours getting two buses, two trains and walking half an hour for the trouble. I hate to admit but getting a car has completely changed our lives. We can do big supermarket shops without having to worry about how the hell we’ll carry it all home. We’ll never have to do a horrible LNER trip up to Yorkshire at Christmas with sacks full of presents again. And we can go to places like Hobbledown. So, worth the hour-plus drive? Definitely. Hobbledown describes itself as an “adventure farm park”, but I feel like that almost downplays its brilliance. Personally I’d go with “play zoo”, since the animals feel distinctly more zooey than farmy, and the play offer is insanely good, even with a fairly hefty chunk of it closed on the day we visited.

Ok so animal-wise it’s all a pretty free-range experience with lots of walkthrough enclosures. Highlights include the ring-tailed lemurs and rainbow lorikeets, and Babu was particularly excited about the “tiny kangaroos” (wallabies), and the rheas with their adorable babies. The animal trail is currently a one-way kind of a deal and you’re supposed to wait for the group in front of you to leave before you enter some of the enclosures, although a lot of people weren’t bothering with that, which was stressful. Actually the “what Coronavirus?” theme seemed to extend across the whole site, despite the effort the staff had gone to with the social distancing signs, and it made me more than a bit anxious on numerous occasions. But at the very least there were hand-gel dispensers and sinks absolutely everywhere, so you could regularly wash off the Other People Germs.

So, like I said, two pretty major play areas – namely the indoor play barn and the beautiful, brand new (and annoyingly now open as I type this) Fern’s Castle – were closed when we visited in early July. The play barn remains closed at time of writing because y’know, COVID, which is a shame because as indoor play areas go it looks really awesome and non-naff, with lots of wooden climbing structures and tunnels to explore, in addition to the traditional soft-play offer. I can let the play barn go, but I am proper gutted about Fern’s Castle because it basically looked like an actual castle only with massive slides poking out if it. Also, I did look basically finished when we were there so I’m convinced they opened it the day after and now we can’t go back because it’s so expensive and yeah… womp womp.

Anyway, let’s focus on the bits we did play with, because they were pretty great too. So, the playground consists of two ‘villages’: Hobbledown Village and Mining Village. The former is aimed at over-fives and was pretty scary looking with its winding sky tunnels, lofty towers and underground burrows, while the latter is newer and aimed at all ages, consisting mainly of a series of village shops and businesses – kind of like Picnic or Role2Play but outside and sitting in a giant sandpit. I actually preferred the Mining Village even though Hobbledown Village is the more eye-catching of the two – mainly because I’m neurotic and was convinced someone was going to break something, and also because it was a complete no-go-zone with Ro, who just sort of waddled around stricken and shouting “EH!”, which roughly translates as “I’d like to do this now please, Mother. Kindly assist me.”

All in all, I’d say it’s definitely worth the £18 per person (although I’m not sure I’d be saying that if Roma was six months older and we’d had to pay £72 for the four of us – particularly since you’re only allowed to stay for four hours at the moment, unless it’s a quiet day). Everything we did was great. The animals looked happy and well cared for, and the playground really was exceptional. I forgot to mention above that there’s also some kind of weird covered (but not technically indoor) play house thing with slanted floors that make you feel a bit sick, which was a nice addition to the outdoor things. Basically there’s loads and loads to do and it’s probably almost worth getting membership if you live near, even if it is eye-wateringly expensive.

Where and when?: Find Hobbledown at Horton Lane, Horton, KT19 8PT. Epsom station (mainline) is a 28-minute walk. Hobbledown is open 8.30am to 6pm daily.

Best Bits: Apart from the playground we couldn’t go in? It was all pretty great to be fair, but I’m still annoyed.

Worst Bits: Apart from the playground we couldn’t go in? Social distancing had pretty much gone out the window, but that’s not Hobbledown’s fault.

Would We Come Back?: We’ll have to or I’ll die sad.

Babu and Sprog brave the sky tunnels in the Hobbledown Village playground at Hobbledown, Epsom.