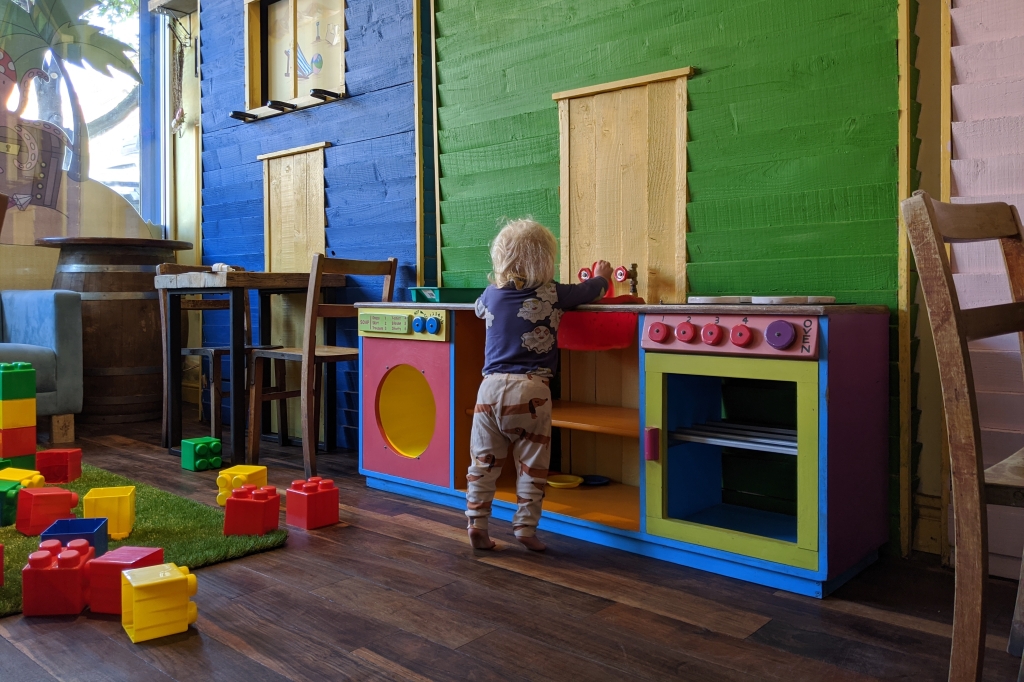 What?: We last visited a Bertie and Boo site more than three years ago, when the chain had three cafes and Babu was younger than Roma is now. Today the Adventure Island is the only remaining Bertie and Boo venue, with Clapham Junction’s Restaurant and Play site closing its doors last year and the Balham coffee shop waving goodbye for good in 2018.

Adventure Island was also the only one of the three we hadn’t tried out – probably because the name is so off-putting and I would genuinely be more inclined to go if it was called Bertie and Boo’s Dystopian Nightmare (actually, that sounds awesome). But to be honest we’ve basically done everything else, haven’t we. So last week we hopped on the Northern Line and made the gruelling 18-stop journey to Balham, which always reminds me of the bit at the end of Atonement where Keira Knightley drowns when a bomb hits a water main and floods the Tube station she’s sheltering in, which ACTUALLY HAPPENED. Well, obviously Keira Knightly wasn’t there when it actually happened, but anyway…

Soft play. It’s the activity we love to hate, except that it’s one of the only things I can currently do with Roma that doesn’t give me horrendous anxiety, so I actually do kind of love it. I just don’t understand why these places are always so garish. Where is my pastel and plywood soft-play dream at, other than at some family club in Shanghai? It continues to baffle me, but I guess I just have to accept that British play centres are generally very ugly, and unfortunately Bertie and Boo isn’t really an exception. I will let it slide though (because I’m nice like that) on account of everything else about this place being great. The staff – great. The coffee – great. The amount of space and lack of other people using it – great. We didn’t actually eat any food but I saw someone else eating something and it looked pretty great. Like literally, if you can get past the vaguely oppressive decor you will love it here. I struggled, because aesthetics concern me deeply, but we still had a lovely time.

Bertie and Boo is currently admitting reduced numbers of people, with up to 20 kids allowed in the building at once. This still sounded like loads to me but actually there were only about five kids, including ours, on the day we visited (admittedly a warm, dry day, so I have no idea how crowded it would feel on a rainy one). Sessions cost £6.50 per child aged six months to six years, are first-come-first-served and last for two hours from arrival (you get a sticker with your time on it). The person on the door was very friendly, took our temperatures and gave us a thorough briefing about Covid safety and the Adventure Island in general before letting us in, and then another person offered us drinks (obviously you pay extra for these, but it’s still nice to be asked).

We sat and drank our coffees in the cafe area while the kids played in the cute purpose-built play kitchen and repeatedly built up then destroyed a wall made from giant plastic bricks, before moving through to a sofa-lined baby-play area complete with ball pool, slide and one of those crawl-through tunnels like the sort you can buy for cats. Beyond that there’s a traditional soft-play structure that’s been loosely designed to resemble a ship and is perfect for 1-3s but probably not that exciting older ones and definitely not suitable for adults to climb aboard, since it’s tiny. The final play space is the ‘Magical Theatre’, another small playroom where the Island’s thrice-daily ‘Magical Storytime’ sessions are held – although presumably they’re currently on hold since they weren’t running while we were there.

When and where?: Find Bertie and Boo’s Adventure Island at 205-207 Balham High Road, a five-minute walk from Balham Tube. Open 9am-5pm daily.

Best bits: This was such a nice, easy morning. The staff made us feel really welcome and the kids loved having so much space to run around in. Plus it’s always a bonus when the coffee’s good, as it so rarely is at kids’ venues.

Would we come back? If we were in the area, yes.

Roro tries out the play kitchen in the main cafe area at Bertie and Boo’s Adventure Island, Balham.