Welcome to London by Marcos Farina 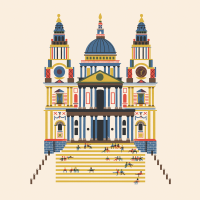 (Button Books) A playful tour of the capital combining fun facts with quirky illustrations in a vibrant primary palette. Kids will be enchanted by Farina’s wacky world where chickens ride double deckers and dogs skateboard down the South Bank, calling to mind Richard Scarry’s animal-inhabited townscapes and Miroslav Sasek’s bustling city scenes. Based in Buenos Aires, Farina uses silkscreen and woodblock printing techniques to create his trademark bold, retro style. He is known for his book and editorial illustrations as well as his packaging and pattern design. www.foyles.co.uk 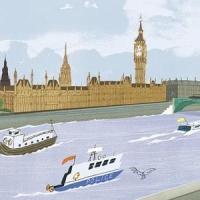 A Walk in London by Salvatore Rubbino (Walker Books) A little girl and her mum embark on an rather exhausting-sounding tour of London, covering 10 famous landmarks on foot in the space of a day. Rubbino’s energetic, sketchy style beautifully communicates the hustle and bustle of the city, while little-known facts will surprise and fascinate even the most seasoned of Londoners. Other titles by Rubbino include A Walk in Paris and A Walk in New York. He grew up in Highbury and still lives, works and walks in London. www.waterstones.com

and Fun Things to Do by Kate Hodges and Sunshine Jackson (Ebury Publishing) While not strictly a children’s book, this indispensable guide will delight Londoners young and old with its tried-and-tested day-trip ideas, child-friendly illustrations and easy-to-use month-by-month format. Written by two battle-scarred mothers, Little London is the resourceful mum mate you wish you had and is packed with inspiration to help you turn London into your playground – rather than the playground becoming your world. www.waterstones.com

This is London by Miroslav Sasek (Universe Publishing) The original children’s illustrated guide to the city has been enchanting Londoners of all ages for more than half a century, and it still feels just as fresh as when it was first published in 1959. Czech artist and author Miroslav Sasek, who died in 1980, is famed for his super-stylised urban illustrations, with other classics including This is New York, This is Venice and This is San Francisco, among many others. westminster-abbey.org

A Possum’s Tail by Gabby Dawnay and 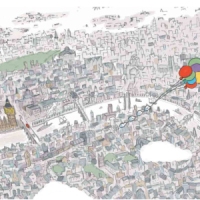 Alex Barrow (Tate Publishing) Follow Samuel Drew and his toy dog as they embark on a journey to visit the possums at London Zoo. Disappointed to find them asleep, Samuel and his dog turn around and head back the way they came, unwittingly entertaining passersby who notice that a whole string of possums have decided to follow them. Barrow’s fun, often childlike illustrations of familiar city scenes combine with Dawnay’s pleasing rhyming couplets in this joyful tale you’ll revisit time and time again. tate.org.uk

London Calls by Gabby Dawnay and Alex Barrow (Tate Publishing) Another captivating London adventure from Dawnay and Barrow, this time starring a little girl and her pearly grandma as they walk, cycle and Tube around the capital, taking in the Gherkin, the Shard, the Eye and a host of interesting characters as they go. With its bright and bold illustrations and simple rhyming text, this cheerful tale will please even the tiniest of city-dwellers, offering them the perfect introduction to all that London has to offer. tate.org.uk

L is for London by Paul Thurlby

(Hachette Children’s Group) A stylish A to Z of London combining Thurlby’s award-winning illustrations of metropolitan icons with fascinating facts about the city past and present; for example, did you know the average Briton spends six months of their life queuing?! Journey from Abbey Road to London Zoo via 24 other iconic destinations, not forgetting to keep an eye out for the little fox hidden on every page. An unadulterated joy for kids, parents and grandparents alike. www.waterstones.com

Big Letter Hunt: London – An Architectural A to Z Around the City, by Rute Nieto Ferreira and Amandine Alessandra (Batsford Books) An architectural take on the A-Z tour of London where the letters become part of the landscape and finding them turns into a treasure hunt. A Y props up a tower block, an R hides within a balcony’s ironwork and an M perches on a roof in this beautifully designed book – a collaboration between Tower Block Books co-founders Ferreira, an urban designer and architect, and Alessandra, a photographer and graphic designer. towerblockbooks.com

All Aboard London by Haily and Kevin

Meyers (BabyLit) Part of BabyLit’s fantastic collection of ‘primer’ board books for babies and toddlers, All Aboard! London gently guides little ones around the city, using carefully chosen verbs to teach them how to respond to the world around them. The travel-themed text (Looking up at the Gherkin; Crossing Tower Bridge) is supported by simple yet distinctive illustrations of familiar landmarks that children will adore. www.bareorganics.co.uk

What Did Alex See? by Rute Nieto Ferreira and Lucy Vigrass (Tower Block Books) Inspired by East London’s vibrant Colombia Road, this charming tale about a little girl’s encounters on her way to school celebrates the joy of noticing new things, even in a familiar environment. Illustrated by Lucy Vigrass, whose artwork has appeared in The New York Times, The Independent and The Guardian, this stunning book elegantly captures the magic of childhood and the colourful energy of this lively pocket of London.  towerblockbooks.com

Bab reads Little London: Child-Friendly Days out and Fun Things to Do by Kate Hodges and Sunshine Jackson