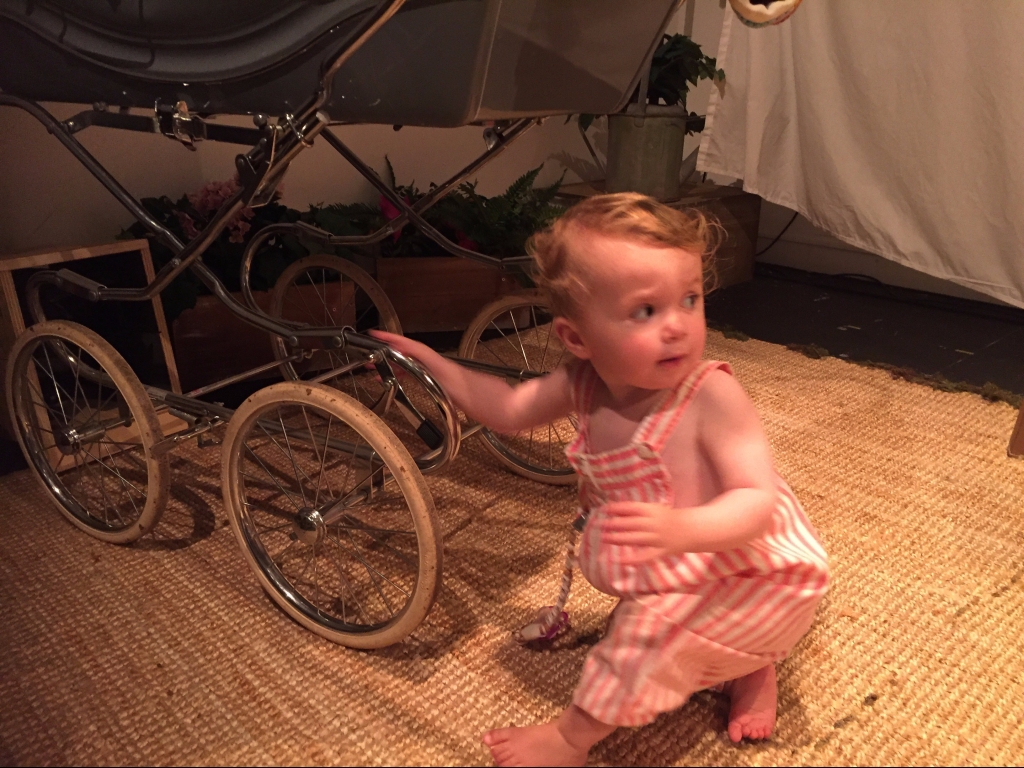 What?: Utterly joyful solo performance in which a man explores his garden whilst trying not to wake his baby. Taking the form of a sensory journey rather than a narrative as such, this intimate show has been specifically designed for babies aged six to 18 months and is filled with carefully choreographed visual gags, repetitive onomatopoeia and audio cues that pre-toddlers will adore.

Set in a truly immersive ‘garden’ environment complete with ivy-clad archway, ‘grassy’ audience seating area and clothes-strewn washing line, Baby Show felt at once magical and familiar, with the real genius being its simplicity. A tiny bullfinch perched on the line led to a bird-naming game, which then became a mesmerising song, before a search for a baby blanket turned into a guffaw-inducing routine involving a moth-eaten sweater. It was 32 degrees outside and I felt really sorry for the actor having to wear a woolly jumper and wellies under the hot studio lights, though he returned the favour by passing out knitted mittens for the adults to fashion into hand puppets, and I think it’s safe to say we were all pretty thankful when it started to ‘rain’ (a refreshing spritz from a spray can of water) and the ‘wind’ (motorised fan) began to blow.

While, as with our recent visit to see Sponge at Little Angel, we were asked to keep ‘stage invaders’ at bay, things felt more relaxed this time and Bab was mostly happy to watch from the periphery rather than attempting to climb onto the performer’s lap. Curiosity did get the better of her a couple of times and she did lumber onto the set once or twice, but somehow everything was so chilled it didn’t really matter. Perhaps it was the smaller audience, consisting of fewer than 10 babies and their adults; maybe it was the warm welcome we received from the front-of-house manager on arrival; or maybe it was the hypnotically tranquil nature of the show, which never got loud thanks to the softly spoken performer and his efforts to calm his cooing baby. Whatever it was, it was dreamy.

Where & When?: Baby Show is on at the Unicorn from now until 19th August, resuming again on the 29th November until the 22nd of December, and again from the 10th May to the 29th July 2018, with three performances per day. Unicorn is on Tooley Street, a 10-minute walk from London Bridge station (Northern, Jubilee, mainline).

Best Bits: Literally everyone we came across here was delightful, from the super-friendly lady running the cafe (who went to the effort of calling someone to check the flapjacks didn’t have nuts in) to the woman who practically chased me out the door with a leaflet about upcoming baby shows, and actor Christian Roe who not only put on a brilliant performance but seemed genuinely thrilled that people had come along. What a truly amazing bunch of people. Nice people are everything, aren’t they? The show could have been absolute toss and we wouldn’t have cared because we were treated so well.

Worst Bits: We were asked not to take photographs during the performance, which resulted in this post-show rush job where Bab looks like a Victorian ghost baby.

Cost: £10 for a combined adult and child ticket, plus £5 for additional adults.

Would We Come Back?: We were so thrilled by everything we’d even come back to see the same play, though I’m particularly excited to check out the 18-month-plus shows, such as Sensacional, in a few months’ time.