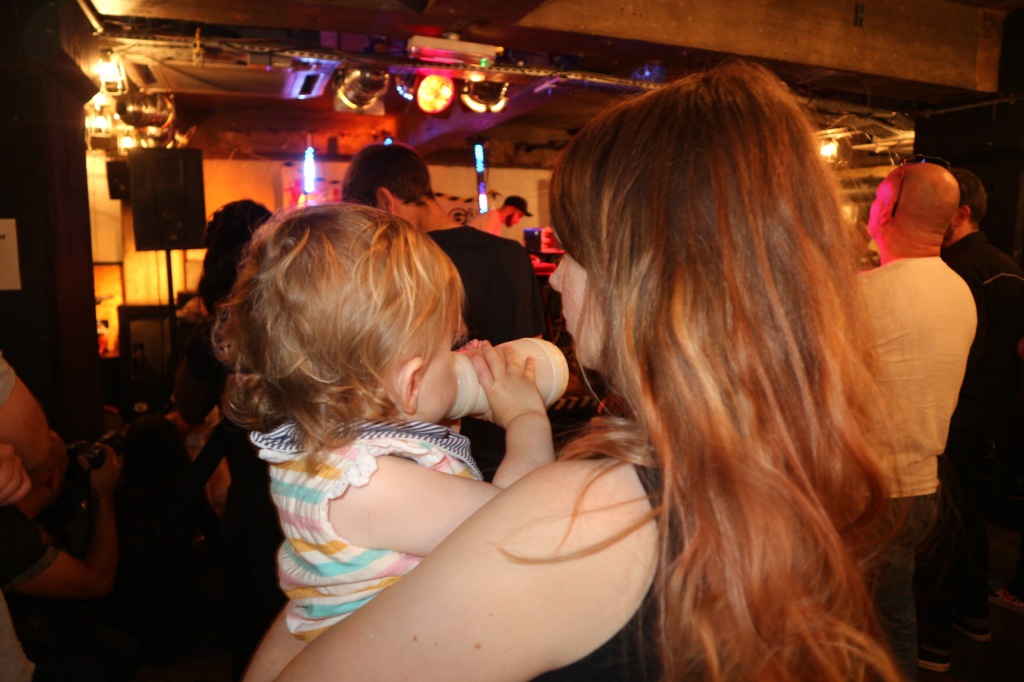 What?: I knew there would be stuff I’d have to give up when I had a child: a flat stomach, lie-ins, a life. But I don’t think I ever really thought about the fact that once I’d ejected the womb creature that had accompanied me to a Morrissey concert 30 weeks into my pregnancy, my gig-going days were probably over for the foreseeable future. Then I launched Bablands and started dragging said creature to things like Big Fish Little Fish family raves, Bach to Baby classical concerts and Monski Mouse’s Baby Disco Dance Hall under-fives parties.

Now while there is a special place in heaven for the organisers of all of these magical, life-affirming events just for giving parents hope that they can experience something vaguely approaching the life they had pre-infant, all of them still left me feeling a tiny bit hard done by in light of these facts: 1. I am not a raver by any stretch of the imagination, 2. pre-MMBDD I hadn’t been to a disco since I was 11 and performed the dance to Tragedy by Steps, and 3. while I have been known to dabble in a bit of Mozart from time to time, all I really want to do is stand in a dark, crowded room with a beer in my hand and loud, live noise flooding my earholes. On numerous occasions I’ve found myself walking away from a music-related parent-and-child activity thinking “that was great, but I wish it had been a gig”, and wondering why the hell that wasn’t a thing. Do people who like indie music just not have kids? Am I the only ‘alt’ parent in London? Well, as it turns out, no I’m not (although I’m probably the only one who uses words like ‘alt’).

Thank God for fellow gig-loving parents Sarada and Adam, whose apparently groundbreaking notion that parents continue to be people and might still be quite keen to do some of the things they did pre-procreation, coupled with the relatively few opportunities London parents are afforded to enjoy live music, led them to launch Wake Up Gigs, a series of family-friendly concerts where the only bouncer you’ll see is a Jumperoo. The couple hosted their first gig in November 2016, when they sold out Shoreditch’s Concrete Space, and they have since put on two more shows.

Late to the party as usual – both in the sense that we only heard about Wake Up Gigs a week before their third concert and also because we were just really late thanks to nap clashes and the fact that we walked around the block twice before we managed to find the right door – we popped along to their triennial offering and were serenaded by Brighton-based alt-pop four-piece Fond of Rudy and London electro-pop duo Avec Sans. Both bands were very much my cup of tea and I’d be enthusiastically inclined to see the pair of them again. But, even if they weren’t and I wasn’t, after an almost-two-year gig drought I don’t think it really mattered. I just really needed loud noises of the melodic, non-whiny variety (the whiny ones were incidentally drowned out quite nicely by the amplifiers).

I have to say though, even in my excitement, I was initially a bit skeptical about the child-friendliness of an earsplitting indie concert held in a blacked-out concrete basement in Shoreditch. We listen to lots of drum-heavy bands at home and Bab seems to enjoy a strong beat, so we had that working in our favour, but I was still unconvinced by the baby-soothing potential of an underground Sunday head-banging session. As it turns out, this was actually one of the most relaxed activities we’ve done with her – thanks in no small part to the gig-side distractions, which included balloon artists poised to whip up a bloated daisy, a toy- and tunnel-filled soft-play area and a cooler-than-average craft table loaded with album cover-themed colouring-in sheets and piles of stickers and glitter.

You could also purchase jazzy Banz kids’ ear defenders at the venue (we didn’t bother because, as you know, we’re terrible parents), but my absolute favourite parental aid wasn’t this or the balloon animals – or even the soft play – but the little box of nappies, wipes and bum cream we discovered in the toilet during our post-gig change. We’d actually miraculously remembered to pack all three of those things for one of the first times in our 17-month parenting career, but just the fact that someone had preempted that need and in doing so probably saved someone from the horror of the post-poo bag rummage where you’re painfully aware you’ve run out of nappies but you just keep looking anyway in the hope that fairies have spirited one into your bag was almost unbearably heartwarming.

Where and when?: Wake Up Gigs take place sporadically throughout the year. Ours was held on a Sunday afternoon at Concrete Space, underneath Pizza East and next to Shoreditch High Street station.

Best Bits: I was quite emotionally overcome by the lengths the organisers had gone to to make this event great and the complete absence of the ubiquitous naffness we’ve come to expect of child-friendly events.

Would We Come Back?: We’re coming to every single future event until the end of time.