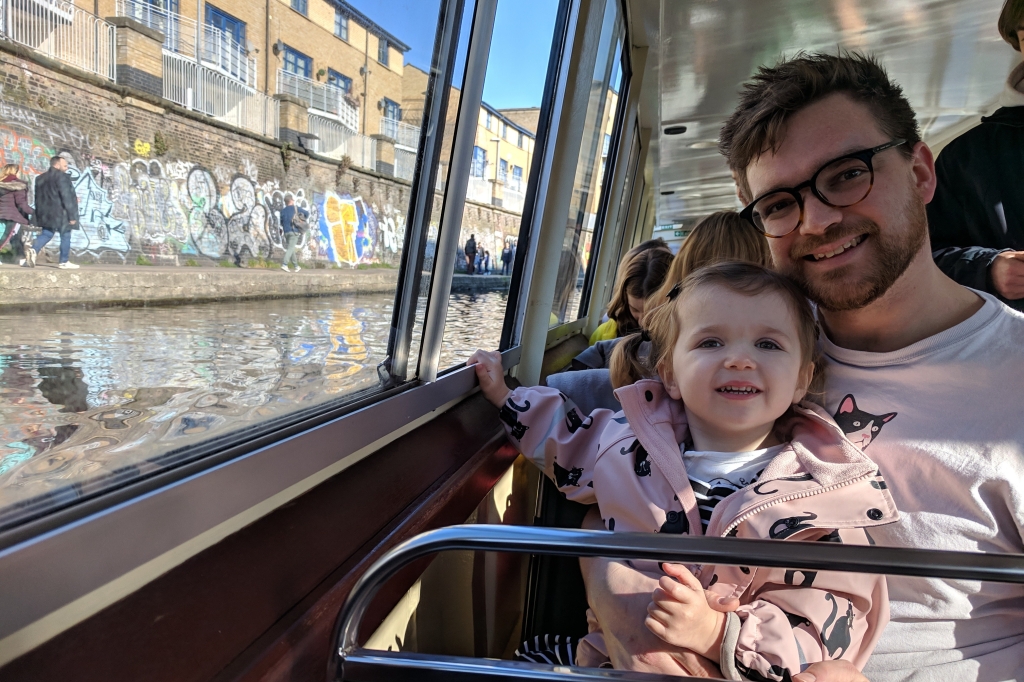 What?: I’ve lived in London for 10 years and in Camden for four, and yet until a couple of weeks ago I was completely oblivious to the fact that boat tours run to and from Camden Lock on a daily basis. The stretch of canal between Camden and Little Venice is one of my favourite London walks; a peaceful hidden world lined with colourful narrowboats, dense foliage and Regency villas. This three-mile portion of the canal also snakes its way past London Zoo’s iconic Snowdon Aviary and its Into Africa enclosure, making a lazy journey down it an ideal activity for little ones who’ll find no shortage of unusual sights to spot out the window.

We decided this would be a good activity for our first trip out as a family of four on the basis that it’s reasonably relaxing (if you don’t count the mega stressful race through a heaving Camden Market on a Sunday with a buggy, a newborn and a grandparent because we only gave ourselves 20 minutes to get down there), involves a lot of sitting down and promised to be a fairly reliable intergenerational people pleaser, because really who doesn’t love a boat trip on a sunny Sunday?

In the end we made it with time to spare – albeit in two groups having been separated in the crowds – and were warmly welcomed aboard. Everything about this tour was chill, from its unfilled seats to its glacial pace and low-key prerecorded voiceover occasionally offering snippets of information about the canal’s history. The staff were so laid back they didn’t care that Babu kept wandering the aisle or when the six year old in front of us repeatedly stuck his head out the window (although admittedly they did issue us with children’s water-safety pamphlets halfway through our journey), which made for one of the calmest activities we’ve ever done with Babu (which is saying something given that her 10-day-old sister also came along for the ride).

We just did the Camden to Little Venice tour, but you can also hop off at the zoo (the boat stop has its own zoo entrance so you can avoid the queue at the main gate) and enjoy discounted entry fees that basically make the boat tour free and the zoo ever so slightly cheaper than buying tickets on the door (apart from in the summer when the price including the boat trip is about the same as general zoo admission). We’ll definitely be doing this on our next spring outing to the zoo and the experience has also really made me want to do a tour of the Thames (instead of just the Clipper) and a bunch of other touristy stuff we’ve never done before – because really why the hell not?

Where and When?: Tours run daily (Wednesday-Sunday during winter) between Camden Lock and Little Venice/London Zoo (journeys to the latter include entry to the zoo).

Best Bits: Fun for all ages and great value for money considering the journey lasts 50 minutes.

Worst Bits: Buggies must be folded and placed on the roof, which might prove difficult with babies (we took a sling). I’d also recommend one adult per child if only so you don’t spend the duration having a series of mini heart attacks.

Would We Do it Again?: Absolutely, though it would be even better if it went to different bits of canal since there’s not a huge amount to do in Little Venice.

Babu and Bab Dad ride the waterbus along the Regent’s Canal.