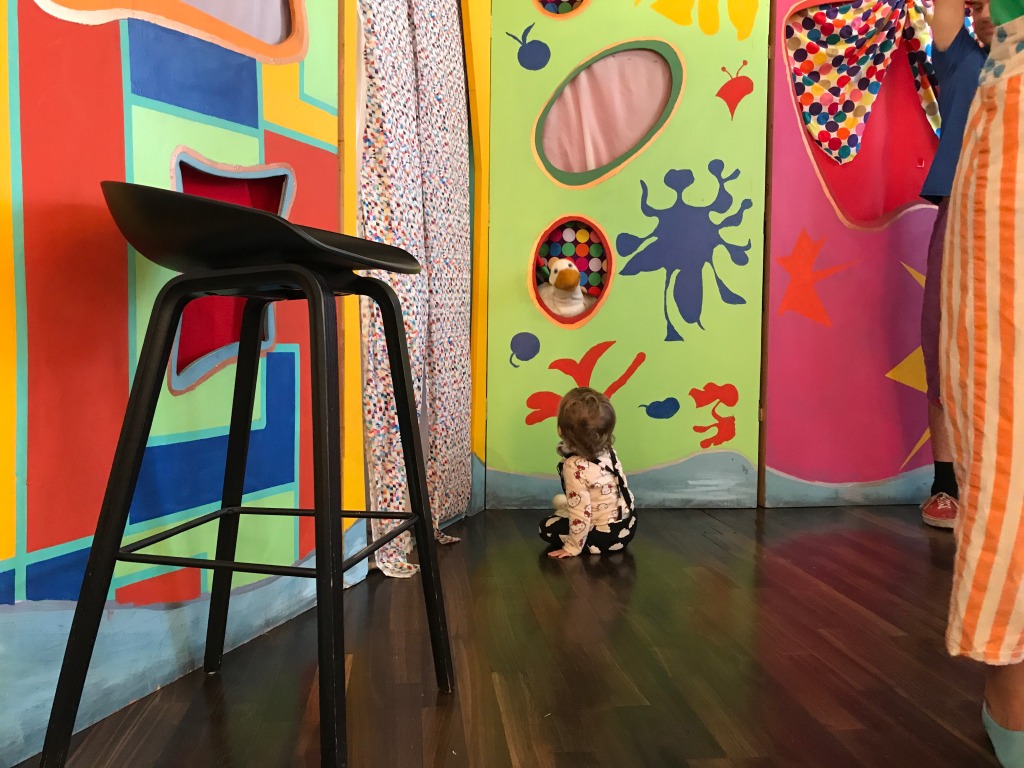 What?: Given our previous toddler-theatre experiences, I was – I think fairly understandably – apprehensive about this one, which was Bab’s first since she’s been upright. Visits to performances such as Baby Show and – in particular – Sponge have seen me restraining her by a hind limb while she did her best to crawl onto the stage and get in on the action, but I was unsure how I would hinder her set-crashing efforts as a frighteningly able ambler.

My heart sank when she almost immediately waddled over to the front of the room and began poking around the set like a peeping tom in the girls’ changing room, but the female performer in the awesome stripy dungarees reassured me that it was fine and that I didn’t need to keep getting up and rescuing her. In fact Tales from the Shed has such an enthusiastic approach to tiny show-stealers that they actually become the performers’ mini muses and shape the direction of each show, resulting in a different experience every time.

Cute and curious audience members aren’t the all-singing, all-dancing performers’ only stage hands though; there’s also an acoustic guitarist playing live music from the wings, and a gang of eccentric puppets – some animal, some human, some of unknown origins – ruling the roost, from Lion Down the friendly feline to Can-Can the rainbow bird and The Thing That Goes Blurgh, as well as so much onstage commotion and audience interaction it’s impossible to get bored.

The sum of these disparate parts is a brilliantly silly and chaotic yet oddly rhythmic piece of theatre that’s deeply engaging for tinies and an absolute joy for adults – even those who don’t like theatre or anything that could be described as ‘wacky’. It was great to finally see some kids’ theatre where the kids didn’t have to sit still, which always seems like an impossible ask, and you didn’t get the impression that the performers secretly hate kids like you do with some children’s events. Bab was so engrossed that she even sat still for about five minutes, which must be a record.

Where and When?: Tales from the Shed is showing at The Old Vic until 5th October (check www.chickenshed.org.uk for further dates and venues). Performances take place upstairs in Mark’s Bar on Thursdays at 10am, 11.15am and 1.30pm. The Old Vic is a three-minute walk from Waterloo (mainline, Northern, Bakerloo, Jubilee, Waterloo & City).

Best Bits: The performers (and Old Vic staff) were brilliant with kids and I love that the show has been designed around them rather than against them.

Worst Bits: I don’t think there were any bad bits, although I did lose my phone case.

Facilities: The Old Vic offers baby-change facilities and space to park buggies. Access is not step-free but there are staff on hand to help.

Would We Come Back?: Yes. Maybe I’ll find my phone case.