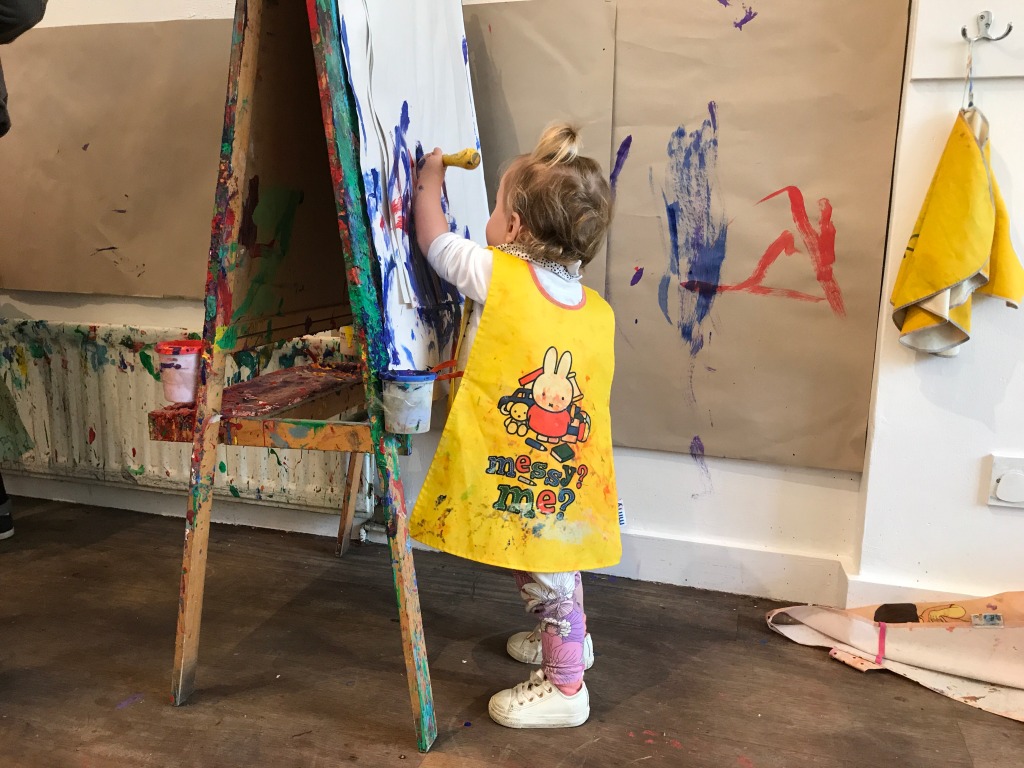 What?: I had high hopes for this art class – partly because the suspense was killing me (I found it months ago and they told me to wait until Bab was walking) and partly because it takes place in an actual, dedicated art school, so it had to be good.

Our session was aimed at children aged 15 months to three years and most of those who came were, like Bab, at the younger end of the scale. While it’s referred to as a ‘class’, the session has a relaxed, free-flow format, and the studio is set up with a variety of different stations for little ones to explore at their own pace. Our activities included easels, a Degas-inspired crafty task, a Play-Doh table, a lizard-based drawing activity, a dog-based sticking activity, and a little play area set up with Mega Bloks.

In keeping with the laid-back vibe there was no formal introduction to the session, though the friendly lead was sure to give newbie adults a run-through of the various activities available to their little ones, and informed us that there are usually water-play tables set up in the garden when the weather’s nice (the weather was not nice). She also led a 10-minute singing session at the end, which was actually quite cute – and I say that as a chronic hater of singing sessions.

As usual Bab slightly missed the point of everything, spending the first 10 minutes wandering from table to table looking confused before discovering the glue and compulsively applying it to the back of a pre-cut paper doggy eyeball that she kept sticking and unsticking to her face. Then it was only a matter of time before she found the easels, on which she decided she would only create collaborative pieces (i.e. hijacking other kids’ paintings), before concluding that charging across the room with a loaded paintbrush in each hand was the way forward. Unfortunately when this happens you just have to let her get on with it and hope no one gets in her way. If she so much as suspects that someone is trying to stop her she will immediately begin panic-painting everything in sight like a threatened bee spreading pollen before it dies.

After a lot of running around brandishing her painty weapons, Bab thankfully decided against a dirty protest – though she did remember that she likes to paint her hands and then touch everything in a 10ft radius, so it was a somewhat passive-aggressive revolt in the end. After she’d finished turning everything blue she had a go at the Degas task (though apparently crepe-paper tutu-making is nowhere near as fun as applying swirls of Pritt to cardboard, despite the teacher’s numerous attempts to convince her otherwise), before having a poke at some Play-Doh.

Overall I thought this was a great little class and was particularly impressed with the venue, which has a kind of cool, upmarket Montessori vibe. The only thing that really annoyed me was the ridiculously uptight nanny sitting next to us at the Play-Doh table who starting shouting for someone to get Bab some water because she’d licked some Doh. Hopefully she’s not employed by the school to over-parent other people’s children though.

Where and When?: Mini Picassos can be found at 8 Station Terrace, Kensal Green, just next to Kensal Rise (Ginger) station. Toddler classes for children aged 15 months to three years happen Monday-Saturday at various times throughout the morning, and there is also a class for children aged 3-4 on Tuesday afternoons.

Best Bits: The recently redecorated studio offers a cool, calm backdrop to creativity with its fresh white walls and wooden floor. Everything felt clean and new, with stylish flourishes including a turfed play area and Miffy/Gruffalo art aprons.

Worst Bits: This class was on the expensive side but I don’t begrudge small businesses for trying to make money, particularly given the price of art materials.

Would We Come Back?: We will but probably not with much frequency given the price.