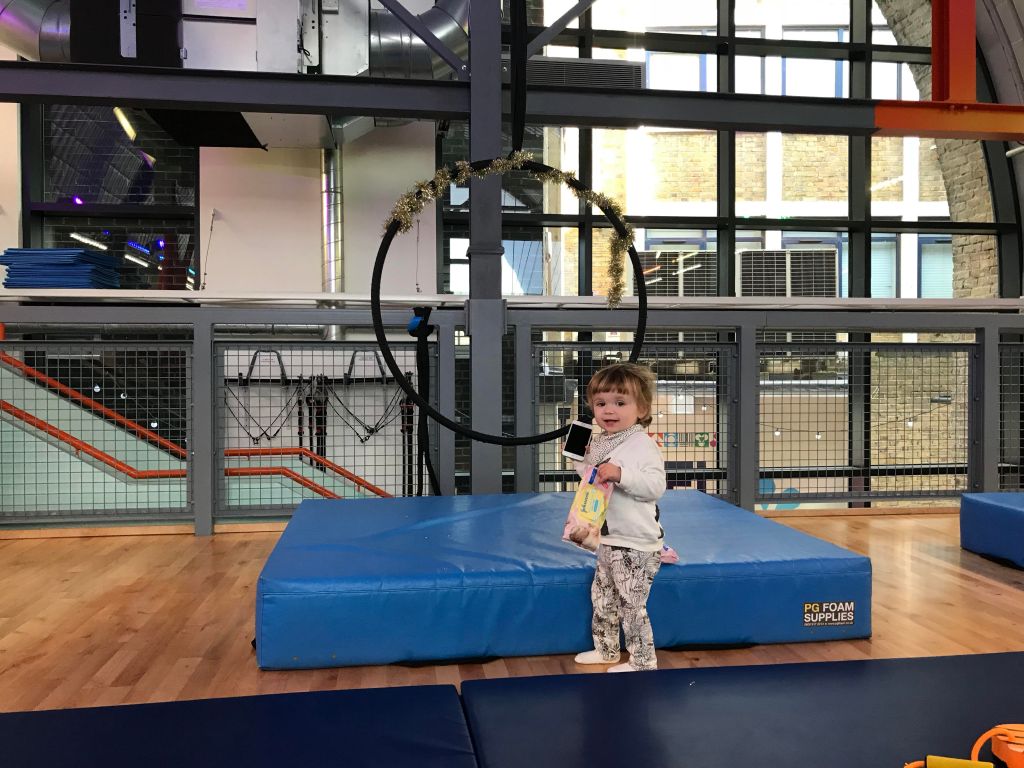 What?: Mini Flyers sessions are – as the name suggests – all about the little ones, having a shorter duration, less structured format and more accessible set of poses to strike than the (I thought) pretty challenging parent-focused Mum and Baby Aerial class we’d been to the week before. Bab is at a slightly awkward age where she’s a little bit too old and into everything for the Mum and Baby class but still a bit too young and feral for the toddler class, which is aimed at 2-4s. Thankfully Flying Fantastic Co-Founder Edel, who runs both classes, is so laid back she’s basically horizontal (often quite literally) and didn’t remotely care that Bab was slightly underage – in fact she was the second-oldest mini flyer there, albeit the least interested.

Our class began with a song and dance to get us in the mood – though Bab was in such a grump Peppa Pig could have turned up with a mobile sweet shop and told her to help herself and she still wouldn’t have been in the mood. Once everyone else was warmed up, Edel showed us how to use the slings, aerial hoops and trapezes to shape ourselves into baubles, stars and Christmas trees. Predictably Bab had absolutely zero interest in getting herself into any kind of festive shape whatsoever since I’d made the cardinal error of letting her raid my bag at the beginning of the session in return for five minutes’ peace so I could have a wee, and since nothing on Earth compares to the excitement of a fresh pack of baby wipes I could pretty much forget about trying to focus her interest on anything else for at least the next hour, and she spent the entirety of the session demolishing the packet of wipes and shouting “NO” in response to any effort to coax her onto the equipment.

So not a roaring success on this occasion, but there’s still a lot of potential for a different day when she’s less tired and less keen to wipe stuff. I really liked the free-flow aspect and the way no one was forced to do anything they didn’t want to (I think if my school PE teachers had taken the same approach I might have developed a healthier relationship with exercise in general), and this is definitely one of the most unique and exciting parent-and-toddler activities out there. The class is particularly good for parents with aerial experience who are keen to get in a workout with their little one in tow, but also works well for total beginners like me since the equipment is rigged to hang close to the floor and there are plenty of shrewdly placed crash mats to avert disasters big and small. I just hope next time we’ll get the chance to be saved by one.

Where and When?: Classes take place on Thursdays from 11.15 to 12pm at Flying Fantastic’s flagship location at 229 Union Street. Southwark (Jubilee) is a three-minute walk, Waterloo (Northern, Bakerloo, Jubilee, Waterloo & City, mainline) is nine and Blackfriars (Circle, District, Thameslink, mainline) is 13.

Best Bits: Everything is super-chilled and free-flow so it really doesn’t matter if your little one isn’t feeling it that day.

Worst Bits: Since it’s completely impossible to make a two year old do anything there’s the chance you might be paying £11 to spend 45 minutes trying to cajole them into using equipment they have absolutely no intention of touching and eventually giving up and just letting them sit on a crash mat consuming the contents of your bag.

Would We Come Back?: I’m going to persevere with this one because I really like it here, though next time I’m confiscating the wipes.