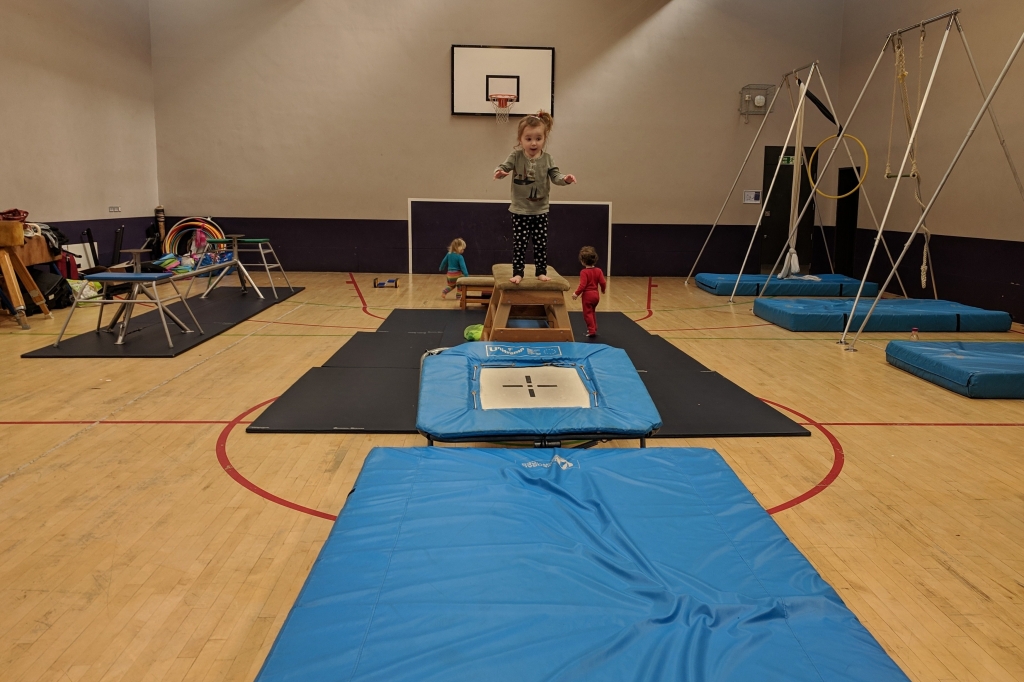 What?: It’s funny what having kids does to you. Pre-Babu the thought of spending a free weekend dangling upside down from an aerial yoga hammock sounded like a fate worse than death, but then I got pregnant and before I knew it the foetus was a one year old and the horrible mundanity of rhyme time beckoned, forcing me to seek out cheap (and, let’s face it, not-so-cheap) thrills in the form of ridiculous-sounding, high-energy mummy-and-me classes designed to zap her energy and suppress my boredom.

We’d tried aerial-fitness centre Flying Fantastic’s Mum and Baby Aerial and Mini Flyers classes and thoroughly enjoyed both, despite wondering if I’d lost my mind on turning up to the studio and seeing the trapezes and hoops suspended ominously from the ceiling. Circus Dreams Families was next on my upside-down-fun list, although I massively stalled on booking it thanks to its being on a Sunday morning when all I want to do is pull out the sofa into a bed so I can lie slumped in front of Sunday Brunch while I try to decide which one out of Tim or Simon is more of an arsehole in real life. (It’s Tim.)

Sundays were not invented for flying yoga. God did not, on the seventh day, get out his aerial silks and spend the afternoon dangling around by his sandals, but then the Circus Dreams site does promise that “a family that flies together stays together” so I decided we should probably give it a go, you know, for the kids’ sakes. I should mention that I did demand (and was granted) – a free ticket. This is something I’ve been doing more since accepting that my career in under-fives-activity critiquing probably isn’t ever going to be particularly lucrative but also that I’m basically handing out free publicity to pretty much every baby and toddler group in a 10-mile radius, So yeah sod it, I’m poor. I have made a vow never to say something was good if it was actually a steaming pile of turds though, even if it was free. So don’t worry, this is a safe space.

Anyway, we made it eventually – albeit 15 minutes late thanks to my underestimation of how bloody slow buses can be and inability to follow the fairly simple directions the receptionist gave me. Circus Dreams Families takes place in the same setting as most of my nightmares: a school gym. Thankfully though it’s missing the tyrannical gym teacher telling you than no one in your class can go for lunch until you’ve performed a forward roll in front of them, or that you’ll have to fish someone else’s rancid old polo shirt out of lost property because you forgot your own. In fact the staff couldn’t be friendlier; the company is family-run and obviously a labour of love. A lot of the other families appear to be regulars and there’s a fantastic sense of community and super-chilled vibe that’s worlds away from the last time I stepped foot in a school gym circa 2005, probably for some ultimately pointless exam or other.

Circus Dream’s range of equipment seems pretty comprehensive, with aerial apparatus (hoop, sling, silks and trapeze) down one side of the room, a series of balance horses and benches with a trampoline at the end in the centre, a tightrope on the other side and a whole bunch of loose equipment including stilts, pedal-gos, diabolos, hula hoops and even cheerleading pom-poms dotted around the room. We pretty much missed the whole of the (non-compulsory) warm-up activity and only caught the last few minutes, which involved balancing feathers on our hands by their ends (both harder and more fun than that sounds) before getting stuck into the equipment.

As you’ll probably know by now we’re big fans of a free-flow class, although Babu’s starting to want to join in with group activities more and more as she gets older so it was good to have that option too. Ultimately though, just being left to explore the apparatus on our own (albeit with lots of staff – I counted eight – to guide us) was all we really wanted. Someone showed me the right way to hold her hand on the tightrope so I didn’t pull her arm off if she fell; someone else spun her around in a little aerial-silk cocoon to save me from knocking out the baby trying to do it myself, and every time we switched apparatus it seemed someone popped up to make sure we could manage (that sounds creepy – it wasn’t).

All in all this was a big hit with Babu. Sometimes she takes a while to warm up to an activity but she was there the second we walked through the door with this one. It reminded me a bit of those ‘hard play’ parties everyone had for their eighth birthday in the nineties (which it’s just occurred to me sound a bit dodgy now), except minus the bouncy castle and the Birdie Song. The mood was definitely more ‘party’ than ‘class’ – and to be honest I think that’s how it should be when it comes to under-fives activities. Saying that, we did learn enough stuff that I’m satisfied she’ll know what she’s doing when I get sick of her shit and send her off to join the circus.

Where and When?: Circus Dreams Families takes place at Stoke Newington School & Sixth Form every Sunday at 11am (ask at reception for directions to the gym). The school is an 18-minute walk from Canonbury, Stoke Newington and Rectory Road Overground stations.

Best Bits: A lovely, relaxed session that encourages kids to get moving without breathing down their necks.

Worst Bits: A bit pricy if you’re just one adult attending with your kid as tickets are sold per family, though pretty reasonable for a family of four when you consider how many staff were there to help.

Cost: £16 per family (up to two adults and two children).

Would We Come Back?: I can’t afford to come too regularly but we’ll definitely be back.