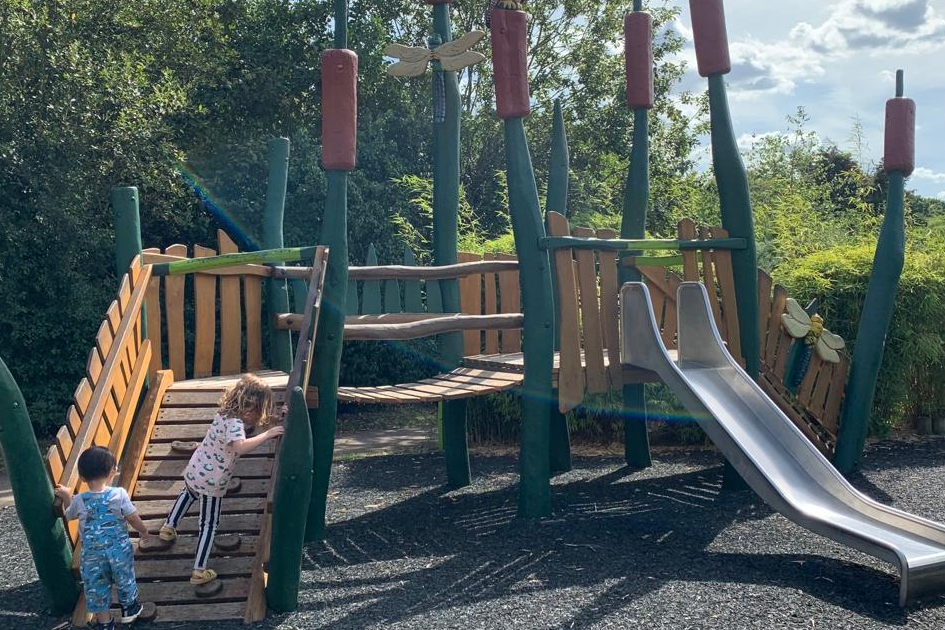 What?: Bablands does the Wetlands. But what the hell even is a wetland? I honestly had no idea, other than the obvious, so I consulted Google, which confirmed that it is actually that simple: “wetlands are parts of our landscape that are defined by the presence of water”. It didn’t sound that exciting, which is probably why I’ve been putting it off these two and a half years, but with Babu about to start morning nursery and epic day trips now reserved for weekends, I decided the time had come.

The first thing I want to say about this place is it’s absolutely humongous and we absolutely did not see all of it, despite spending approx five hours there. I am kind of doubting whether I’m even qualified to review it since we probably covered about an eighth of it and spent most of our time there fannying around throwing gravel and going on seventy five thousand toilet trips, plus I’ve left it six weeks to review it, like I do with everything, so my review is heavily reliant on crap photos/hazy memories/dreams I’ve since had about it.

One thing that’s worth noting is the map makes it look much closer to Barnes station than it actually is because of the huge expanse of green, when it’s actually an absolute mission. Rather than taking the “quick” route and walking up the main road for what feels like an eternity, take a detour through the village and grab a coffee from Gail’s on the way; we did this on the way there and it was so pretty and I actually had a brief Whatsapp conversation with Bab Dad about how we should move to Barnes, whereas the direct route we took on the way back made me sure I never wanted to step foot in that shitbin again as long as I lived.

So, the Wetlands. Big, bleak and beautiful… and very zen, as long as you ignore the whinings of your bored three and a half year old who heard there was a playground and isn’t putting up with anymore of this “walking in nature” bullshit. In fairness it wasn’t just the playground that appealed to Babu; I mean, it was mostly that but she also really enjoyed bird-watching in the three-storey Peacock Tower, running across the rope bridges (by herself, because I had the buggy) and um… throwing gravel.

Ok, so the playground was kind of the highlight, as far as the kids were concerned anyway, and while even that felt kind of tired and wasn’t quite as good as I was expecting, it definitely had its moments. The water table, for example, was awesome. I mean how many playgrounds do you know with outdoor water tables? This one was full of ducks and was fitted with water jets so you could make them swim from one end to another. There was some kind of terrifying tunnel situation that the kids were free to get lost in but was too dinky for adults and you had no idea where they were going to come out. There was a wetland-themed slide/climbing frame complete with wooden reeds. There was a climbing wall. There was a zip wire. There was a weird pink and green fish you could climb inside. It wasn’t the best playground in London, but it was a good one nonetheless.

Other highlights included the weird two-storey (but still pretty small) immersive ‘land’. To be honest I have no idea how to describe this but it was an indoor bit of the Discovery Centre that felt a bit like the inside of one of those sealife centres – i.e. sort of dark and damp. We didn’t linger here long and the kids pretty much ran in one door and straight back out the other, but it was a vaguely interesting 10 seconds. There’s also the BBC Springwatch Experience, where you can film yourself “presenting” the show, though this was obviously geared towards older kids; and we managed to gatecrash a den-building session that I think was, again, aimed at bigger ones. The centre actually runs a whole bunch of workshops during the holidays that are all included in the entry price but you do have to book onto them, so maybe look into that beforehand if you’re planning a trip during the school break.

All in all not the most spectacularly exciting excursion we’ve ever gone on, but we had a really nice, chilled day with our friends. It obviously goes without saying but make sure you pick a nice day for your trip here. It was hot when we went but I reckon this would be equally lovely on a cold, crisp, sunny day. I feel like I’ve said a lot without actually saying anything here, but that’s kind of the point. There isn’t loads to do, but it’s incredibly calm and sort of depressingly beautiful, and the sort of place you really need to be a member of so you can take your time and keep coming back to discover new bits. In an ideal world I’d grab all my mates with kids and head down here on a Sunday for a long walk, followed by a massive lunch at a local pub – but then you could probably do all that elsewhere without having to pay £11.70 per person to access the nature.

Where and When?: The WWT Wetlands Centre can be found on Queen Elizabeth’s Walk in Barnes. It’s a 17-minute walk from Barnes station – longer if you go via town – or there are a few buses you can get. It’s open every day 9.30am-5.30pm.

Worst Bits: There’s not really a massive amount to do and yet somehow you’ll still manage to leave feeling like you didn’t see everything.

Would We Come Back?: I would, but I probably won’t.