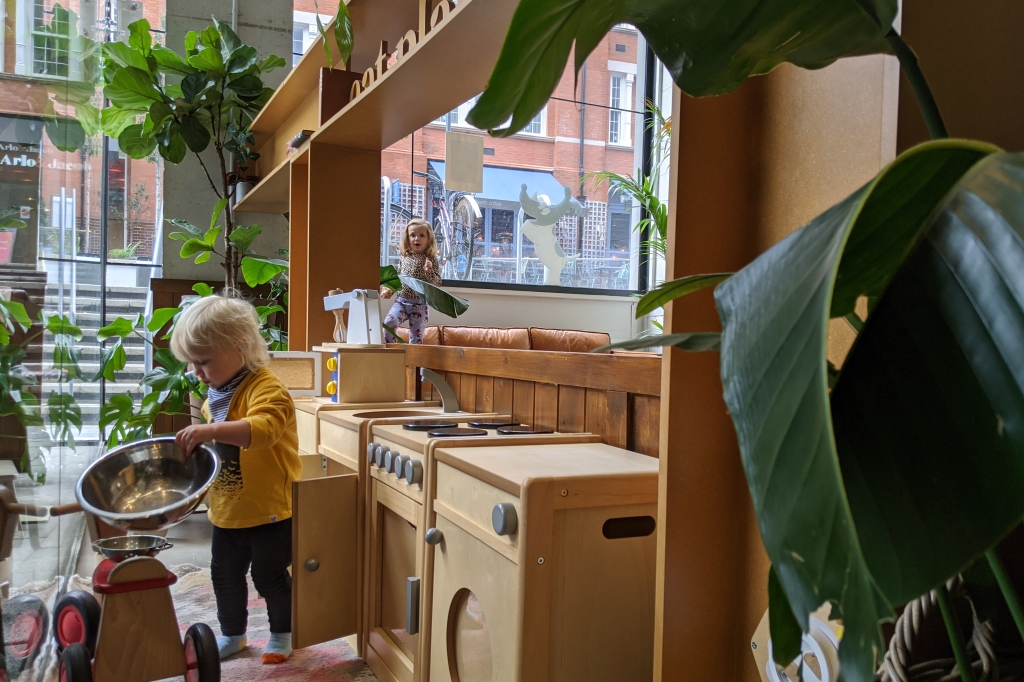 What?: I was vaguely apprehensive about trying out Maggie & Rose’s Islington cafe after our crappy experience with a rude receptionist after we won a free day pass for their neighbouring Family Club a few months ago. Equally, I was mega excited to try out a non-exclusive space of their devising, having always enjoyed their pop-ups and general aesthetic, and obviously being a big play-cafe fan. I always feel slightly uncomfortable about members’ clubs and their keeping-out-the-riffraff vibes, so this felt like a nice, inclusive alternative.

That said, I kind of got the impression that most of the people in here were members who were waiting for their session to begin next door, since the space would randomly get really busy, followed by a mass exodus 10 minutes later. I also reckon that if I spent enough time here I’d eventually think “fuck it” and sign up for membership. Like, I can completely see why people join the club; it’s easy and relaxed with incredible soft play. Sure, the receptionist was snarky but maybe that was just because I wasn’t a member. Maybe she treats paying customers differently. Who the hell knows.

Anyway, the cafe. I love it. Like the club it’s very much designed as a place where adults will actually want to hang out, with a lofty ceiling giving the illusion of space despite a relatively small footprint, shit loads of pot plants and a lot of exposed concrete; and yet the focus remains on the kids, with the main play-kitchen area arranged across the length of the glass shopfront, along with a large wooden sign that reads “eat play learn” (and thankfully not “live laugh love”).

Next to the till there’s a very cute rowing boat for kids to play in, complete with child-sized life jackets, while in the lounge area next to the play kitchen you’ll also find one of Maggie & Rose’s trademark Maileg dolls’ houses, which comes fully furnished and inhabited by bunnies. Other child-friendly bits include a tray filled with coloured pencils and ‘dabber’ painting pens, and a shelf stacked with Montessori-style sequin boards. Dutch style icon Miffy also has a strong presence in the cafe, appearing in the big framed prints that line the walls, as well as in the form of a Mr Maria lamp, a nod to the time the cafe offered a Miffy-themed afternoon tea, which sadly it no longer does.

Menu wise, it’s all pretty healthy, with posh-sounding sandwiches and wraps sitting alongside salads and protein pots. On the plus side it’s all pretty reasonably priced, but the downer is it doesn’t sound massively child friendly, considering it’s a family cafe. We plumped for a blueberry muffin in lieu of anything more exciting, since there were no other cakes available bar a couple of Danish pastries, and I’d promised Babu cake. The coffee was good and the babyccino came in a mini paper coffee cup with a straw. All nice, and had it been lunchtime I may well have been tempted by a crayfish panini, but all we really wanted at 3pm on a Saturday was cake, and they didn’t really deliver. So yeah, needs more cake then it’s perfect.

When and where?: Maggie & Rose cafe can be found in the rather lovely Esther Anne Place, just behind Upper Street. It’s a nine-minute walk to Essex Road (mainline), 10 to Highbury & Islington (Tube, Overground) and 12 to Angel (Tube). Opening times are currently 8am-3pm Wednesday-Friday and 10am-5pm Saturday.

Best bits: It’s a cafe that’s as nice for adults as it is for kids. Win win.

Worst bits: The play area is small and the kids eventually got a bit bored, but then we had been there two hours.

Would we come back? Definitely, I really liked it here.

Roro and Babu check out the play area at Maggie & Rose cafe, Islington.