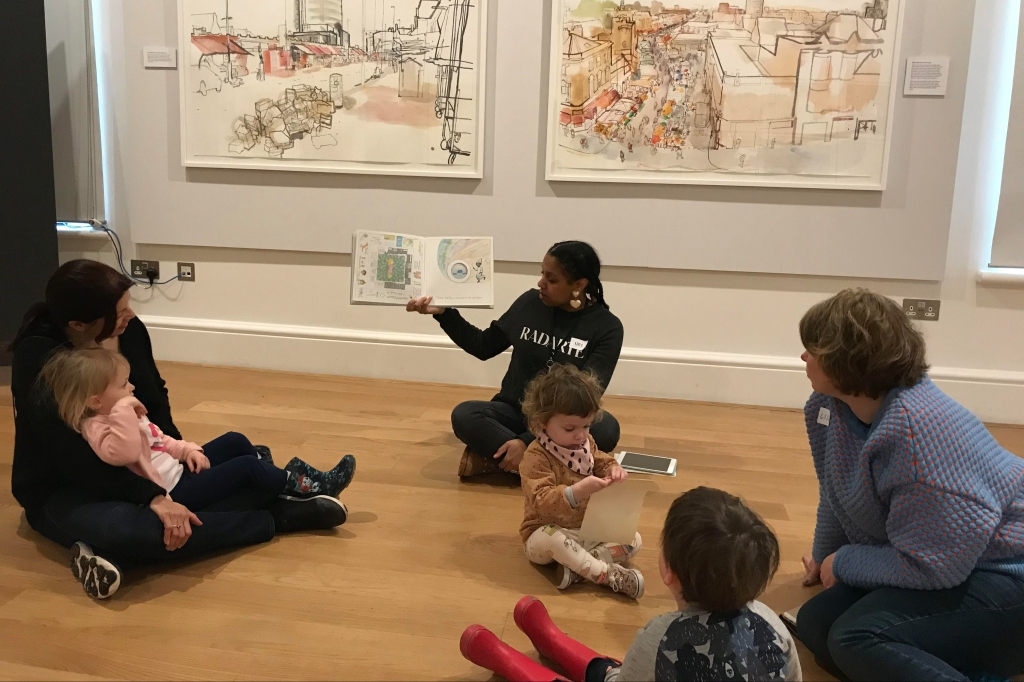 What?: We’d been meaning to visit House of Illustration for months but I’d always been put off by the £8 entrance fee – particularly since you never really get your money’s worth in a gallery with a feral toddler in tow. Creative Fun for 2-5s seemed to be the answer – two hours in which you and your tiny are invited to explore the space, listen to stories, play games and make your own artwork to take home – and all for the princely sum of absolutely nothing (at least for the first few ‘pilot’ sessions).

House of Illustration is quieter than your average Central London gallery and it’s easy to fret that your tiny terrors are disturbing the peace as they dash from room to room, their shrieks bouncing off the walls. In actual fact the gallery, which was founded by Quentin Blake and contains numerous works by children’s illustrators, is much more child-friendly than most and offers a brilliantly inspiring backdrop for the workshop, which is designed to get preschoolers used to exploring gallery spaces and responding to art.

Our session was based around Lucinda Rogers’ On Gentrification, a series of colourful pen-and-watercolour illustrations depicting Dalston’s vibrant Ridley Road Market, which Babu and I had incidentally walked through a few days before. It began in the downstairs studio with a warm-up wall-drawing activity before we all headed up to the gallery. Here we had a wander round the exhibition, tried to find various items of clothing within Rogers’ street scenes, listened to a story on a related theme, and finally headed back to the studio for our main painting-and-cutting task.

At a week shy of her second birthday, Bab was the youngest of the toddlers by quite a bit and at times I struggled to keep her focused on what we were meant to be doing – particularly when it involved sitting still for a long period of time (this girl has a serious case of ants in her pants) – but I liked the variety of activities and the ingenuity of the making task, which involved creating prints using watercolours and then cutting them out into shapes resembling items of clothing.

Personally I would always opt for a free-flow workshop such as Parasol Unit’s Project Light over a more structured one like this – partly because I love seeing how Bab responds to creative stimulus on her own and partly because I feel like trying to make her do anything she doesn’t want to in a creative sense is completely pointless. Also when we have to sit down and make something with a definite outcome the perfectionist in me always has an overwhelming urge to make the best one and then I end up really disappointed when I remember I’m crap at doing art.

Where and When?: Sessions take place on alternate Wednesdays during term time – some at 10.30am and some at 2pm (check Eventbrite for details). House of Illustration can be found at 2 Granary Square and is a couple of minutes’ walk from King’s Cross.

Worst Bits: Bab’s attention span was nowhere near long enough for the craft activity at the end.

Cost: Our session was part of the pilot and was free; future sessions cost £5.83 a time.

Would We Come Back?: Yes, although I might wait until Bab is a teensy bit older.