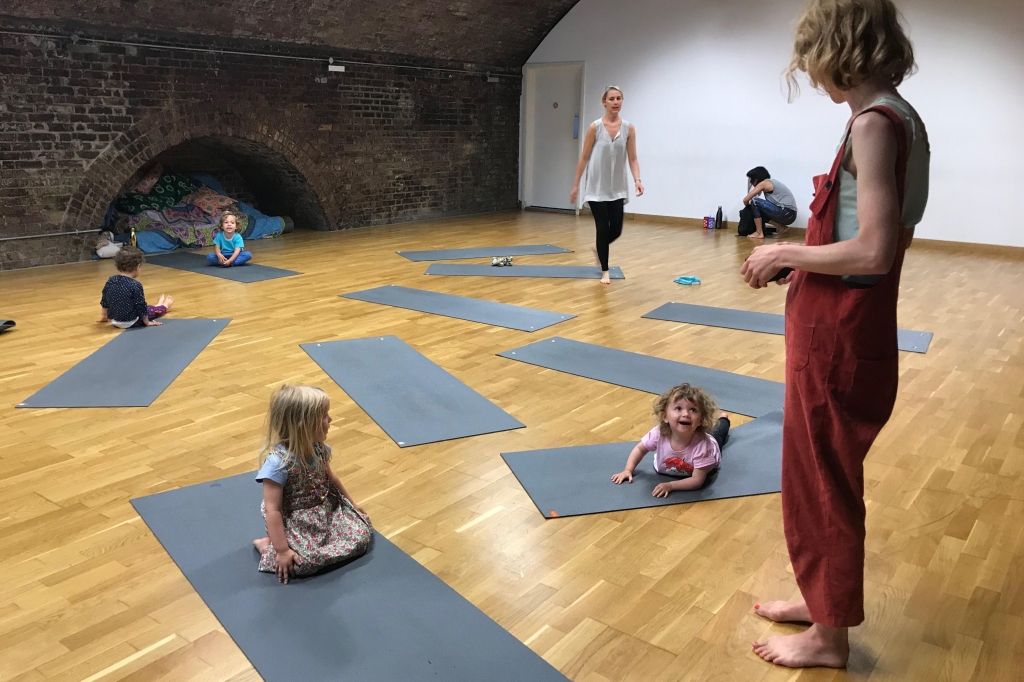 What?: A class so unlike our semi-regular mums & toddlers yoga at The Life Centre in Islington but (almost) as good, we’re going to try and alternate the two in a lazy attempt to keep life interesting. I found this one slightly more child-focused than the other, with more of an emphasis on music and singing (as the name suggests) and less on specific yoga poses – although they were sort of loosely woven in too.

Aimed at ages 18 months to four years and their mums/dads/grannies/nannies/whoever fancies coming along, this unique class combines music, breathing, storytelling and relaxation, having been specially devised by teacher Emily McGregor to introduce toddlers to the world of yoga in the most fun and creative way possible, as well as offering adults the albeit pretty slim chance to relax a bit.

Emily began the class by coming round with a lavender spray for our hands and feet, which Babu took and then immediately regretted when she had a mild allergic reaction that meant she spent the remainder shouting “ITCHY” at me. Then we did some breathing, or tried to anyway, and some stretching before launching into some singing accompanied by actions vaguely reminiscent of some yoga I did once when I was about 24 and absolutely not making the most of my childless freedom.

There was something involving maracas and a storybook, some rolling around the room, a role-play bit where we all became wild animals, and probably some other stuff I didn’t notice because I was desperately trying to scrape the lavender crap off Babu’s feet with wet wipes. Then came the best part: the part while the toddlers are offered snacks in return for five minutes peace for their adult. Unfortunately for me the offering was cucumber, of which Babu is not a fan, but once she’d accepted that I wasn’t going to budge from my blanket cocoon to read Giraffes Can’t Dance to her, she gave up and crawled under the blanket too – and then I managed to get about 90 seconds of peace.

Where and When?: This session takes place 10.30-11.15am on Fridays at TripSpace, a three-minute walk from Haggerston Overground station.

Best Bits: Totally different to every other yoga class we’ve been to and very engaging for the kiddies – or at least it would have been were it not for itchy-foot-gate.

Worst Bits: I’m a bit of a yoga novice (read: shit) and had no idea what to do when we were told to “do your own thing” on the mats so I just sort of lay there like a dead fish.

Would We Come Back?: We’re already planning to.